In 2017, Swiss director Milo Rau set up a highly influential theatrical trial: The Congo Tribunal. Despite pointing out the fictional status of his tribunal, he expresses a great desire for the collected material to be taken seriously and for his theatrical creation to inspire real court hearings in the future. As the international community never initiated a lawsuit to judge the systematic attacks on the Congolese population from 1994 onwards, Rau brought together various groups of the population in his theatrical trial. The court case consisted of members of the government, the opposition, victims, witnesses, (former) rebels, farmers, miners, activists, and both local and international experts. In Congo, where the governor of Bukavu intervened in the debate from the audience, the tribunal caused heated discussions that were taken up by the media and various politicians. Consequently, the government and several large companies were held responsible by this fictional tribunal. Moreover, the World Bank and the European Union were convicted as well in a second verdict.

When imperial abuses, sexual assault, (eco-)colonialism, and other problems are neglected by the international community, theater can publicly condemn these shortcomings within the real legal system by assembling public meetings itself. Thereby, theater claims a voice in the debate that can counteract the dominant point of view. After all, theater, as a live event, can be regarded as the utmost suitable place to discuss actual topics and heated debates. The performing arts are an ephemeral medium that approaches reality as near as an artform ever can. Therefore, theater seems to be an appropriate apparatus for dealing with injustices in society. While real lawsuits emphasize legal responsibility, theatrical tribunals focus on moral responsibility. This shift is exemplary for contemporary court case performances, which is why the tribunal genre is highly desirable to build upon, to complete and even to precede regular proceedings, trials, and tribunals. 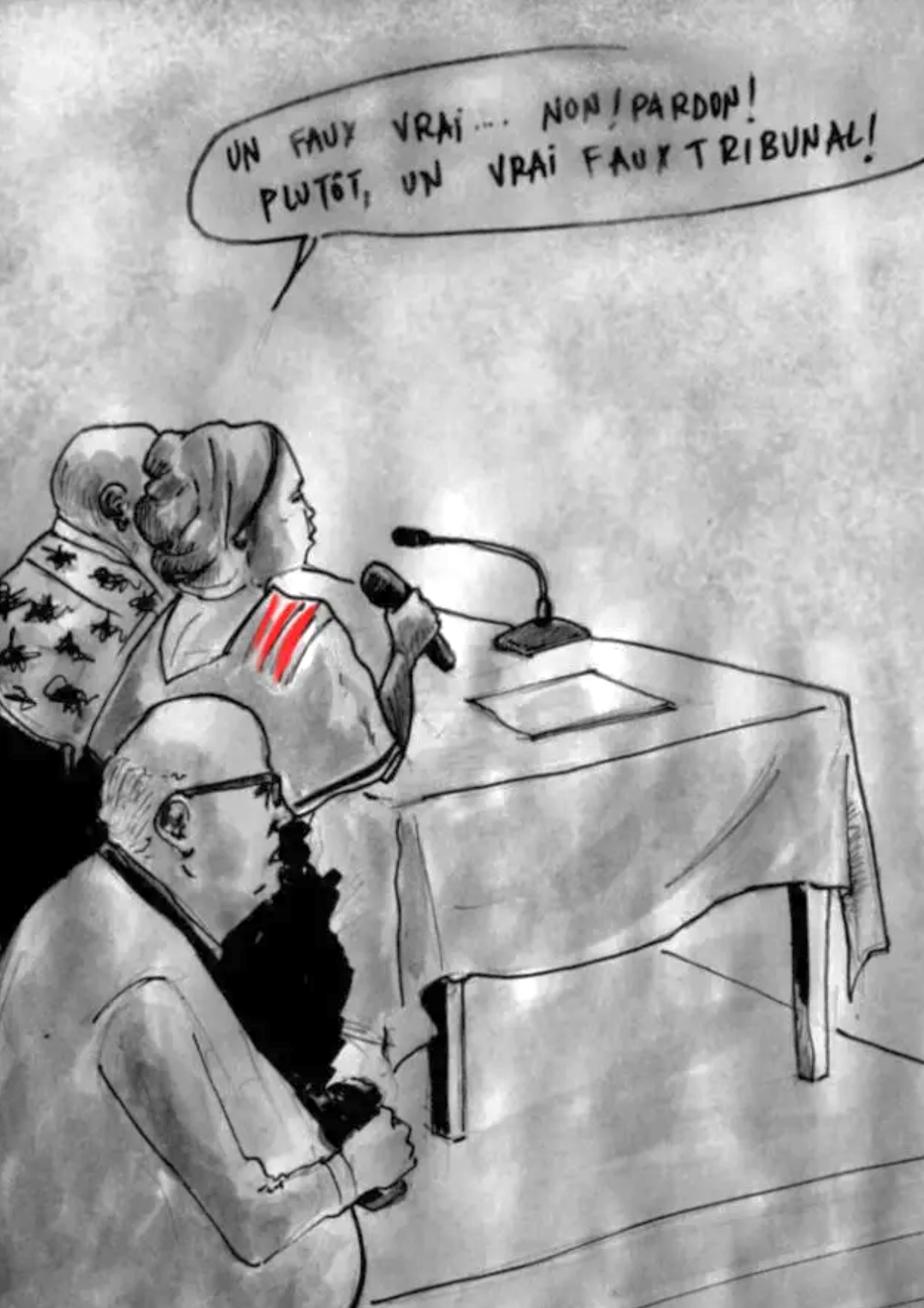 Although historical research into the connection between law and theater, as well as into twentieth-century theatrical tribunals is widespread (e.g. Arjomand 2018; Read 2016; Tindemans 2016), the recurring theme of justice in contemporary performance practices remains largely unexplored. However, an increasing number of twenty-first-century artists have begun relying on structures of the court in their performances, especially in West European theater. After all, the courtroom can be considered as a specific dramatic place with its own dramaturgy, scenography, script, and dramatis personae. Some theater companies and theater directors who have already implemented such structures in their works are Action Zoo Humain, Lara Staal and Yoonis Osman Nuur, Rebekka de Wit and Anoek Nuyens, Jonas Staal, Christophe Meierhans, Agency, Milo Rau, Maria Lucia Cruz Correia, Rosella Biscotti, etc.. By creating theatrical tribunals, these artists attempt to create a space for alternative jurisdiction. Therefore, this special issue of Documenta seeks to examine the close connection between the courtroom and the stage by means of a comparative study of court cases and their fictional counterparts: theatrical court case performances and tribunals.

Following the approach of twentieth-century dramatists that used documentary strategies to stage preeminent lawsuits, contributions may analyze theatrical re-enactments of historical court cases from both the present and the past. However, artists today do not only look to the past, but are especially interested in the future as they radically question the premise of law’s objectivity by offering an alternative point of view to justice on stage. Therefore, contributions may also delve into pre-enactment as an important strategy to rethink systemic ways of enacting law, and to reflect upon new imaginaries beyond regular proceedings. After all, although theater remains a non-event that never could have the same coercive power to change reality directly, the possible outcomes of these (p)re-enacting lawsuits are to be questioned. By rethinking, deconstructing, and reconfigurating the theatrical dramaturgy of the courtroom on stage, this special issue seeks to take into consideration the powerful meta-narrative installed that may cause individual spectators to contemplate stubborn systemics within the courtroom in particular, and within society in general.

We kindly invite in-depth contributions in the format of approximately 8000-word essays. Shorter artistic contributions, essays, interviews, manifestos, artists statements, thoughts, concerns, and other meditations on the topic that consider theater, law, and justice in the broadest sense possible are welcome too.

All proposals and submissions should be sent directly to Steff Nellis (steff.nellis@ugent.be). Issue related enquiries should be directed to the issue editor as well.

Alongside long-form, in-depth articles, we encourage short articles, thoughts, and provocations. As with previous editions of Documenta, we welcome artist pages and other contributions that use distinctive layouts and typographies for our portfolio section, as well as more conventional essays. Book reviews on the topic of theater, law, and justice are welcome as well. Informal suitability checks are recommended.

Documenta currently enjoys an A1.2 status and is VABB-listed. In recent years, there has been a shift in focus as we are increasingly working – not to say exclusively – with thematic focusses. These special issues are entrusted to guest editors who are responsible for recruiting articles, contact with the authors, and providing all the necessary materials

At Documenta the peer review system is an integral part of the submission and evaluation process. The system of double-blind peer review ensures that published research is rigorous and meets the international standards set by each discipline. We engage in a collaborative refereeing process, which ensures that the work submitted is evaluated by and commented upon by two independent referees selected by the editors based on their areas of expertise. The editors will make the final decision about publication or assess the need for further revision. Feedback is then shared with the author. However, the reviewer’s name is not disclosed.